My house is going up so fast. It took a long time making a granite choice and then it took a while to get a piece of the granite so I could take it with me to make backsplash choices.

Last weekend I finally had the granite piece that I could use to match colors. Nancy and I had decided I needed a very "quiet" backsplash because the granite was so colorful and busy. We thought the backsplash tile should be monochromatic; it should be nondescript and fade away so it wouldn't compete with the granite.

So we began our search. We started at Lowes. I figured we would just narrow down some color choices but probably not find "the" backsplash.

Nancy thought maybe a stainless backsplash would work. We found some but I wasn't feeling it. It was just such a cold combination.

We continued to try different tiles against the granite. We came up with some maybes but nothing thrilled us. One of the Lowes employees came to see if he could help us. We told him what we were doing and showed him the granite. He oohed and aahed over the granite; he said it was so unique. And then he said he knew what we needed. He said he had the perfect tile. He went down the aisle and came back with "the perfect tile". He placed it against the granite and we all exclaimed how wonderful it was.

It was so different from what we were looking for. It has every color of the granite and together they are perfect. We would have probably missed it if he hadn't stopped to help us.  I can't imagine anything better. And, I can hardly wait to see it installed.  Soon . . , 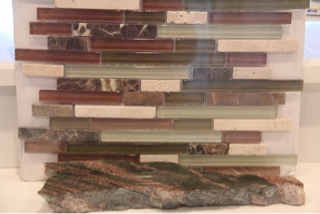 Posted by Vicki Gilbreath at 8:55 PM No comments:

I have so much to be thankful for.  But high on my list these days is my new house.  It's important to me that I give thanks to all that have helped this happen.  But mostly I thank My Lord and Savior, Jesus Christ.  He has been so good to me.  He watches over me.  He leads me.  He protects me.  He gives abundantly!  And I want to honor Him in all I do and say.

It is important to me that my new home have a good foundation - physically and spiritually.  So I asked my friends and family to bless my house by writing a scripture somewhere in the house.  I want to be sure I have a blessed home! Thank you to all that were able to do this for me.  Here are some of the blessings I received:

Over the headboard in my Master Bedroom 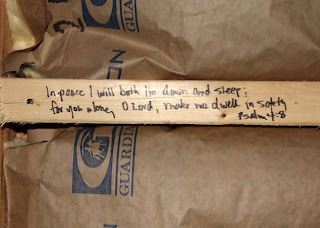 By the front door as you are leaving 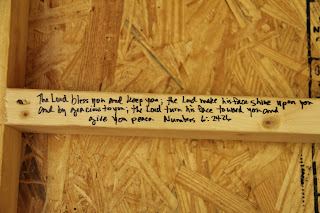 Where my piano will be 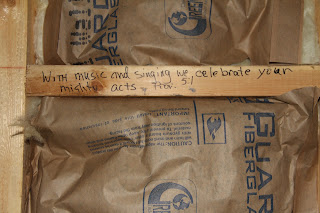 In my Master Bathroom 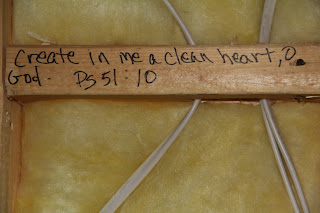 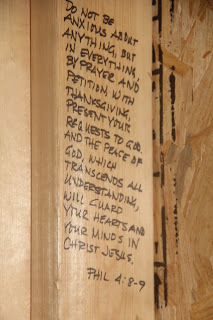 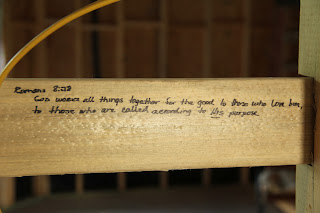 And another one in my kitchen 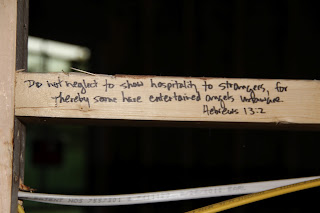 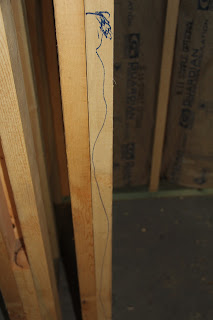 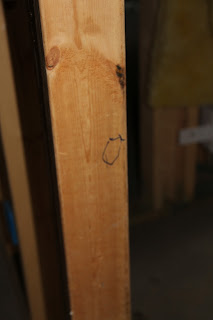 Thank you again for all the many blessings.  And thank you, Lord.

Posted by Vicki Gilbreath at 8:49 PM No comments:

I closed escrow on my lot on July 18. Today, August 16, the house is fully framed, waiting for the roof and everything inside. But I can walk through my house and see it in 3-D, no longer just lines on a drawing. It's better than I imagined! So unique; so my style.

Electrician and plumber are due tomorrow. Drywall in a week to ten days!

I'm in awe of this process and so incredibly pleased at what I get to see every day. It's hard to believe that I can be living here in a few months.

This looks from my living room into the kitchen and the courtyard outside the kitchen. 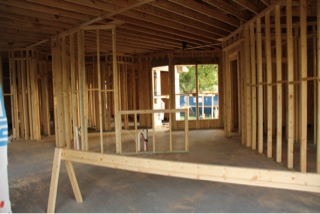 Here's how it looks today (the garage is on the left; the tree is in front of my front door). 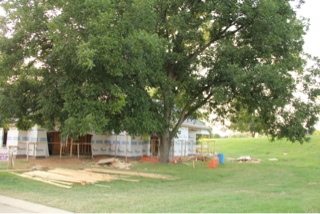 This looks into the master bedroom. 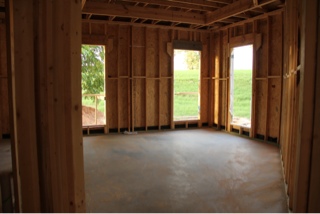 This is from the dining room, looking into the living room and the French doors out to the covered patio.  (My master bedroom is behind the wall of the living room.) And the last picture is looking from the garage down the hallway to the kitchen at the end. 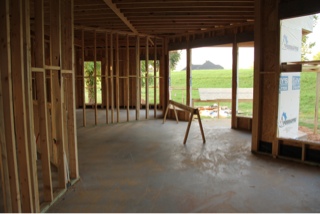 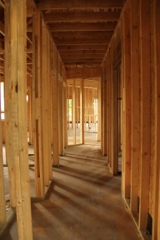 Posted by Vicki Gilbreath at 8:09 PM No comments:

Good to See You, Crocodile

See you later, Alligator. After while, Crocodile.

I'm sure everyone's heard this catchy little exchange when you're telling someone goodby. I started saying this to Noel when he was 2-ish but he'd just look at me like I'm a little strange (which I admit I am sometimes). So I moved on and have been working on Isaac. At least he seemed to enjoy this phrase but he's never responded (I say, See you later, Alligator.  He's supposed to say, After while, Crocodile).

The other day we were saying our goodbyes - I hadn't even said the alligator phrase.  Isaac looked at me and said (in his sweet little 3-year old voice), "Good to see you, Crocodile." And then grinned that huge, dimpled smile.  Boy did my heart melt!

So, what in the world does all this have to do with my house building?  Well, a lot in a round about way.

Nancy and I went to Monroe today to look for granite for my kitchen. We've looked here in Shreveport but just haven't found the right granite. I am attracted to unusual granite. For me I don't like the speckled granite.  I'm drawn to granites that have movement in them - river-like patterns of colors.  And I want a green/black/gray color.  I didn't find anything in Shreveport that was affordable so we went to Louisiana Stone in Monroe.

The granite selection was a bit mind-boggling. Who knew there were so many varieties of granite and marble.  So we walked up and down the aisles.  "I like this one." "This one might do."  And then we found it!  I was immediately drawn to it but we continued up and down the aisles (and it was hot inside that warehouse).  But nothing grabbed me like the one we'd seen on that other aisle. So we went back and I knew it was the one. It's not for everyone but I love it. Charcoals, dark greens, ashy-creams and wine colors. And it's called Crocodile!

Good to see you, Crocodile. 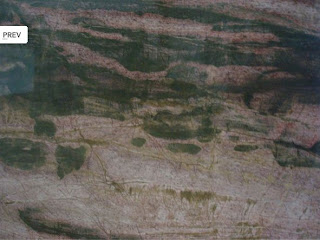 By the Light of the Moon

It was fascinating watching truck after truck arrive, hook up to the pump, unload its contents, watch the cement being directed to the proper formed spots in my foundation - all efficiently and expeditiously!  By about 9:30 the cement pouring was done; the concrete finishers still hard at it! 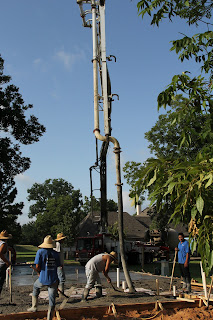 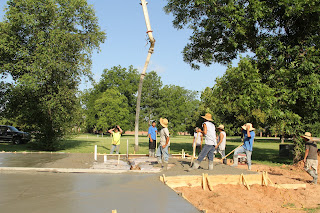 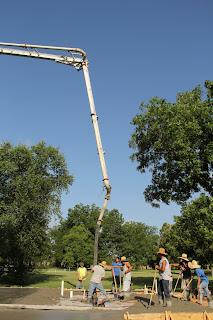 Curtis had surgery Monday on his right foot.  But he was there to oversee this critical stage of my home build.  At one point he was alerted to a problem with the forms around my courtyard.  He confirmed the problem, directed the correction and had it fixed before the cement set in that area. 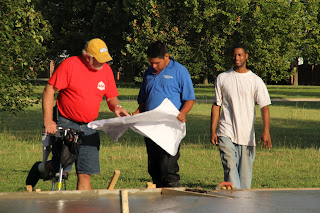 Pouring concrete is like a dance.  All the participants have their individual roles but they must all perform their part well for the performance as a whole to be successful.  They did and it was.  Bravo!

So, concrete has been poured and finished.  My tiles have been inserted (see previous post) and we're ready for framing to begin Monday! 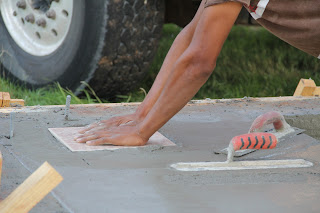 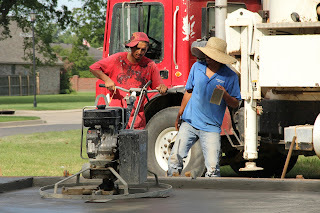 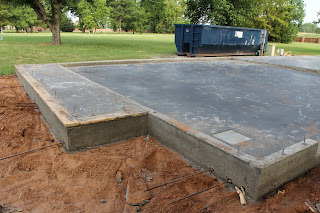 Posted by Vicki Gilbreath at 4:14 PM No comments:

Who is Building My House? 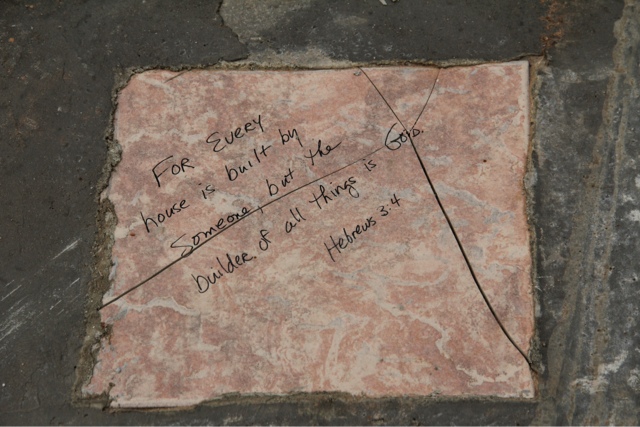 When I knew I was going to build my house I also knew I would write in my slab when it was poured. I had watched Nancy write a verse in her slab while Randy held her belt from behind to prevent her from falling into the cement. I knew that even if I had Randy's help again, I couldn't easily write in the actual cement.  So I decided to write my verses on a tile and have the tiles put into the cement before it set.

I watched the pouring of the slab and waited for the right moment to set my tiles.  The cement finisher was working in the area I had picked for the tile in the picture at the top of this entry. We gathered around, several of the cement workers, Curtis (my contractor), and Curtis' helpers.  I handed my tile to the finisher on the slab. He roughed up a spot, placed the tile and pushed it into the cement with his hands.

In a split second I saw the crew boss pick up a stake and pound it into the tile.  The tile split.  He looked mortified, the finisher looked stunned and Curtis, without even missing a beat, got on his cell phone to get another tile to replace the broken one. I hadn't even really looked at the tile yet but everyone was apologizing.  I went and looked at the tile; saw the crack centered in the word "God" and saw the cross the crack created.

I went over to Curtis and told him I didn't want the tile replaced. He asked if I was sure  I said it was perfect just as it was. Man is flawed and even though we build houses they and we aren't perfect.  But God is the perfect builder of everything. And the tile in my cement is my constant reminder.
Posted by Vicki Gilbreath at 2:35 PM 2 comments:

I've often marveled at how people can build things from a sheet of paper into a completed structure. I never thought I would actually watch the process from start to finish on my own home.

I'm in awe of the skill and craftsmanship of builders and construction workers. Case in point - today the plumbing for my house was rough set. I've been learning my house for months now by studying my plans. But I cannot relate what I think I know with the physical state of my lot.

I know where the kitchen should be but the pipe in the middle of the house seems so wrong! I know it's all correct because Curtis tells me it is.

The laundry room and guest bathroom look tiny, tiny. I know they're not but I can no longer see my house as it looks like on the plans I know so well.

But I'm not worried. I'm intrigued and ready to see my house develop before my eyes. 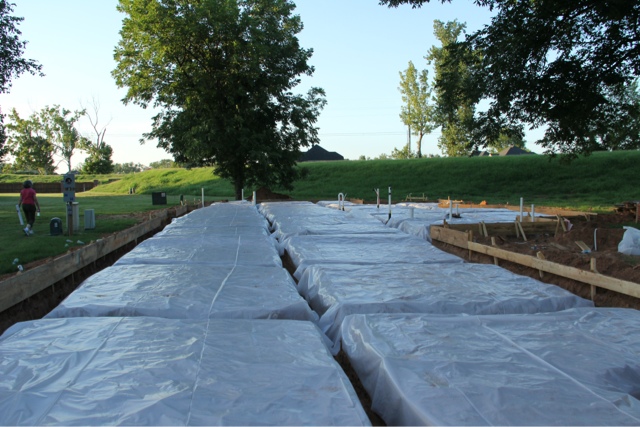 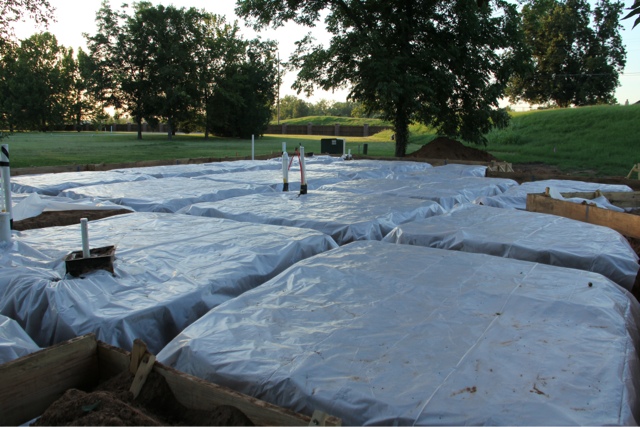 Posted by Vicki Gilbreath at 8:57 PM No comments:

Promote Your Page Too